While many auto makers have been embracing sim racing in recent months, perhaps no other company is alining themselves closer with virtual racing than BMW right now. While the German manufacturer is massively scaling back their involvement in real motorsports following their departure from DTM, Formula E and cutting ties with long-term works team Schnitzer Motorsport, BMW’s focus in racing is shifting to the virtual world.

After announcing a partnership with Fanatec that will see the actual real-life steering wheel of the BMW M4 GT3 race car to be made available to sim racers in Q2, the company also unveiled a new line of sim racing furniture called BMW Fusion SL.

Designed by BMW Designworks and built by Sedus Stoll Group , the BMW Fusion SL combines a lounge chair slash racing seat and a sim racing cockpit stand that can be turned into an ordinary coffee table, a concept BMW calls hybrid furniture.

While this certainly isn’t aimed at ordinary sim racers with a dedicated racing rig, it could be a good solution for everyone looking to integrate a sim racing setup into a more traditional living room environment in a non-intrusive way.

Pricing info on the BMW Fusion SL is not yet available but considering the fact that regular single lounge chairs from Sedus sell for prices upwards of 1200 Euros, the chair & rig combo will likely be outside the budget of most sim racers. 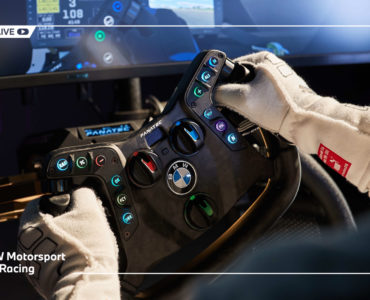